THE NEW CONCRETE: VISUAL POETRY IN THE 21ST CENTURY


With Victoria Bean I am the co-editor of The New Concrete: Visual Poetry in the 21st Century (Hayward Publishing, 2015). The New Concrete is a long-overdue survey of the rise of concrete poetry in the digital age. The accessibility of digital text and image manipulation, modern print techniques and the rise of self-publishing have invigorated a movement that first emerged in an explosion of literary creativity during the 1950s and 1960s. This volume is a highly illustrated overview of contemporary artists and poets working at the intersection  of visual art and literature, producing some of the most engaging and challenging work in either medium.

Featuring an introductory essay by renowned American poet Kenneth Goldsmith and edited by celebrated poets Victoria Bean and Chris McCabe, The New Concrete is an indispensable introduction to the breadth of concrete poetry being produced today.

I was on a panel discussing What was/is Concrete Poetry? with Peter Finch and Arnaud Desjardin which took place on 1st July 2009. I also curated an evening of performances called xprmntl ptry with performances which included Peter Finch, Geraldine Monk and Jeremy Reed with The Ginger Light. My poem 'Recession' was used on the flier for the exhibition. 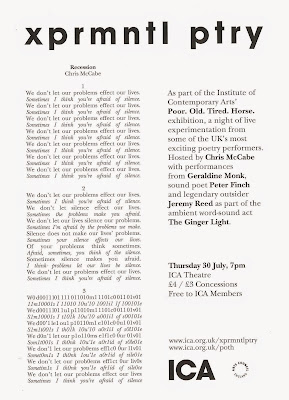 This project was undertaken in summer 2013 as a commission for the Curious trail at West Norwood Cemetery to create new work in response to the dead. I decided to research the dead poets in the cemetery and to take two words from one of their poems to have etched into the stones, such as this one below for Demetrios Capetanakis: 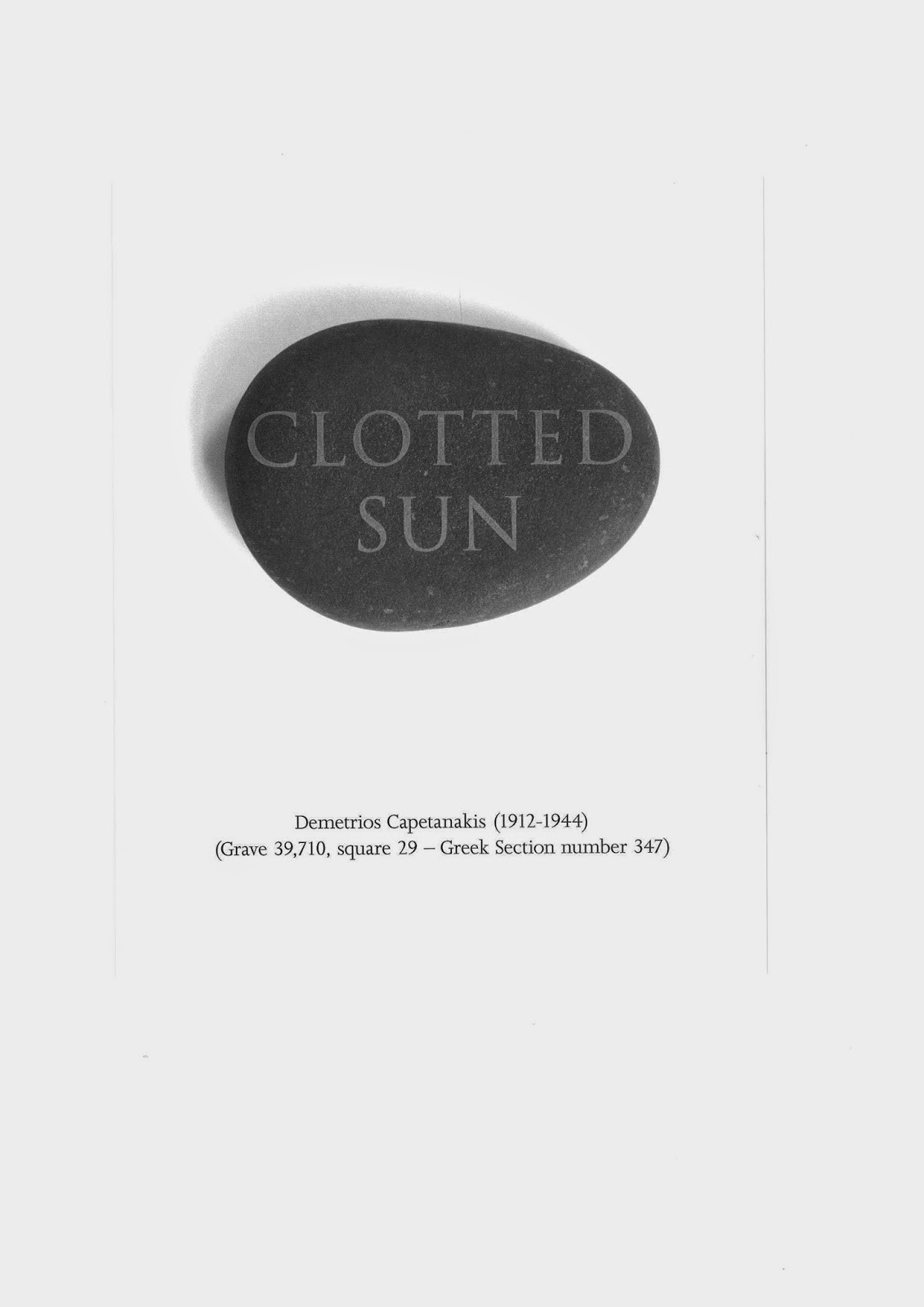 Each stone was then taken and placed back on the grave, or site of the burial, of each poet.

This project became part of the narrative of my book In the Catacombs: a Summer Among the Dead Poets of West Norwood Cemetery, published by Penned in the Margins (2014), an extract of which can be read here

A limited edition book was created, working with the Henningham Family Press, under the title Clotted Sun. Some lovely images here. The book is a portfolio which contains a life-size reproduction of each stone on card and a map of the cemetery showing the poets' burial locations. The book was published as an edition of 50 (10 of which are deluxe and include a gold-coloured deboss of the Clotted Sun card). Some copies are still available for £40 (email chrismccabe17@hotmail.com for enquiries).

Pharmapoetica is a collaborative project with Maria Vlotides which was shortlisted for the 2014 Ted Hughes Award. I have written about this project on my blog here . The ten poems about herbs were written to be displayed as labels on apothecary jars which are then contained in a cabinet. The Londonist created a podcast about this in January 2014 which can be heard here. Copies of the book are available from Pedestrian Publishing here.

This is a sequence in which the narrative of Genesis has been rewritten through omitting letters that already exist in the text to create new meanings and a new visual dimension. The sequence is indebted to Edwin Morgan's 'emergent' poems in which he created the technique of using a pre-exisiting line in literature to allow new meanings to form through the letters used in that line. Genesis, however, is de-emergent in that the existing line appears first and the new meanings become increasingly atomised from the letters available for use. The whole sequence creates a new account of how the world began, suggesting the star constellations born of the Big Bang.


In the beginning God created the heaven and the earth

The Dedalus Poems is published in an edition of 100, 26 of which are hardback and signed (priced at £70) and 74 are paperback (priced at £30). Books can be ordered from moxham.ulyssesart@gmail.com

This is a piece from the book which is based on James Joyce's Ulysses (I've written on poems for sale about my obsession with Ulysses here). This piece, called The Fertility of the Question is made using two characters  - a question mark and the letter 'o' - and responds to the moment in the novel where Leopold Bloom goes to the offices of the Freeman's Journal to have an ad placed in the paper; the editor wants him to place this on a three month renewal but Bloom's client only wants two. Bloom has to negotiate the back-and-forth questions between the two parties. Bloom is aware that his wife Molly has a 4pm assignation with her lover Blazes Boylan and Bloom himself is carrying a letter from a woman he's started to write to called Martha, who has asked him about what kind of perfume Molly likes to wear. 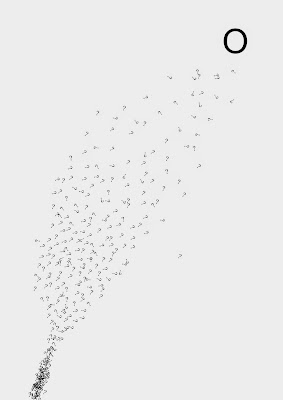 This limited print of 50 was made at Plymouth Art College for the occasion of my Bloomsday reading at the Language Club (organised by Norman Jope and Steve Spence) on 16th June 2016. The print is of the image above from my Dedalus sequence. The print is blind embossed photopolymer plate on Somerset Satin Grey Velvet 280gsm. The print is deliberately very minimal using a blind deboss to suggest the impact of James Joyce's near blindness on his work. 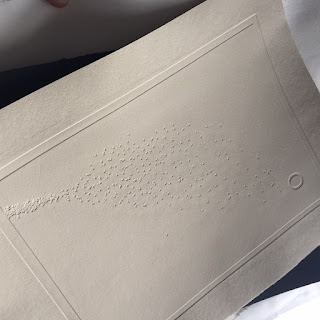 THE AFFAIRS OF DYLAN THOMAS

This is a sequence of 16 collages created in Wales, on the Llyn Peninsula, in August 2015. The sequence is a parody on the obsession with writer's lives and documents Dylan Thomas' numerous affairs in relation to the Muse-Goddess figure the White Goddess, as outlined in Robert Graves's book The White Goddess. The images were created using materials given to me by artist Sophie Herxheimer along with found materials on the holiday campsite and were fixed using almond paste and thick textured card. 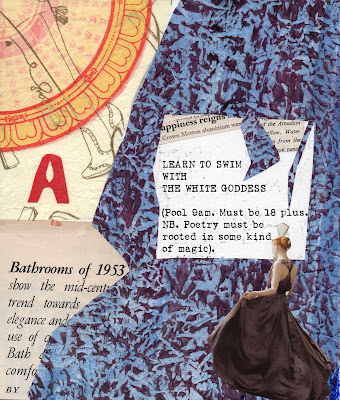 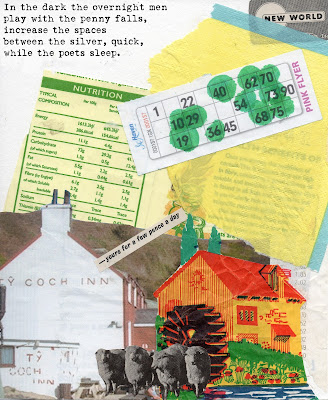 I've become interested in painting typefaces, using colour to bring out the character of each font. These were painted with watercolours in Barcelona over the week of my 40th birthday, early August 2017. 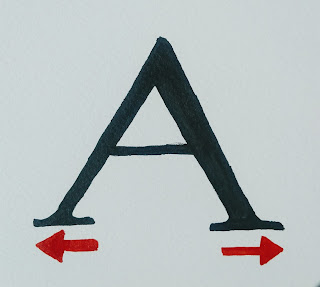 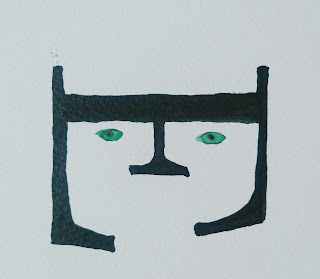 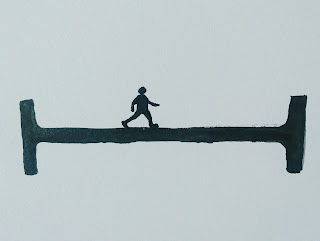 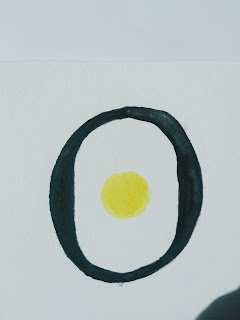 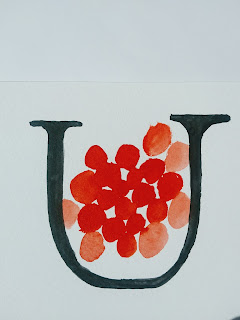 PAINT HER TO YOUR OWN MIND

In 2016 I was invited to make a response to page 147 of Laurence Sterne's Tristram Shandy. This famous blank page in Sterne's novel was left blank by Sterne for the reader to create an image of their own imagined beauty. This was the piece that is included in the boxed set of postcards published by The Laurence Sterne Trust: