In the Catacombs : published this week 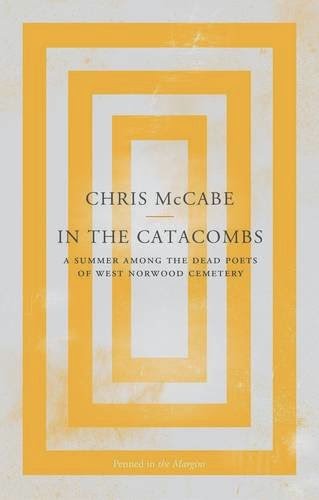 I'm delighted with the publication of  In the Catacombs : a summer among the Dead Poets of West Norwood Cemetery, published this week by the dynamic Penned in the Margins. The book represents a year spent among the graves of the overlooked poets in south London's West Norwood Cemetery, looking for work that deserves its place back in the full light of poetic readership. I set my stall high for this, using Hopkins, Tennyson (of In Memoriam) and Dickinson as the luminaries by which to look afresh at the work of these London dead. Arthur Symons, a London psychogeographer long before Guy Debord invented the term, and Arthur Rimbaud – who was a contemporary in London at the same time as Anna Kingsford, whose family vault is in Norwood – are also up for discussion.

West Norwood as a place is the core of the book; its literal, liminal presence on London's landscape, and its metaphorical associations as a commune of dead poets still striving for a live audience. The book also includes a fictional strand based around a conceptual poet who will go to any extreme to make poetry from the 'found': his uncompromising approach to his art takes him into the grounds of the cemetery, to the grave of poet John Yarrow (1818-1898), who he believes is his own double.

The book represents the first stage in a series which attempts to map out the rest of the Magnificent Seven cemeteries; the next stage being Nunhead.

In the Catacombs: a summer among the dead poets of West Norwood Cemetery is available from Penned in the Margins here

oliver dixon said…
Hi Chris,
I'm really looking forward to reading the book, remembering the walk we did in West Norwood Cemetery last summer. The blog-post I wrote about it has proved one of my most popular.
All the best,
Oliver
17 July 2014 at 14:32

E Melville said…
No doubt your appearance on NPR will generate much attention as your reading of the Kingfisher was captivating. Just before hearing this piece, my mind was occupied with a kerfuffle I'd just had with my teenage daughter. Your reading transported me to your day with your child, the missed opportunity of seeing the great bird replaced with something more important and powerful. Parenthood demands the displacement of self and ego but the reward is priceless. Thanks for the reminder of its exquisite nature.
22 August 2014 at 05:17