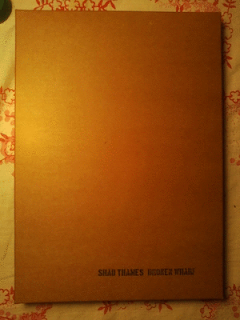 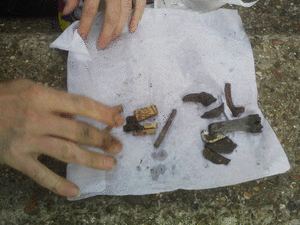 This is the second Sunday morning this year that I've sat on Wapping Old Stairs waiting for someone to arrive. The first time was a photographer. As I was waiting I walked down the emerald-moss of the steps, holding the rail, and felched my shoes in the mud. I started to scavenge, lifting back bricks to show nano-crayfish scuttling.

Everything I find I place on a large stone, in a line, like an interview-test for an archaeologist. A thick bone, the marrow’s saliva set to stone inside; a smooth wooden implement; cracked chunks of earthenware pots and the glory piece: what seems to be a ring made of slim loops with an empty bed for a lost stone. Victorain claypipes, each one smoked by a Victorian man, his life as real to him at the point of disposing his porcleain fix to the river as mine is now. My eyes aren’t used to looking for things so closely – it takes the joint work of concentration and openness to chance (the way of reading the city) to a new level, the temptation is to relax the eyes for the bigger mosaic, at which point the detail is lost.

Nice bone you have there, the photographer said, when he arrived.

Six months later I'm waiting for Tom Chivers. Sunday morning, 9.30am - I've been awake for five hours, stumbling out of bed in Liverpool and, from the slept-through Pendolino (the dipping lull of the Transmidland Liverpool to London Express is named Nuneaton) made straight for Wapping Old Stairs. Tom's late. His lateness can only be measured like this : a fossilised horse tooth, an unidentified mammal bone, pottery fragments, a plastic nozzle.

There's only one walk which beats the drive of 'time being money' and that's Tom's - time is ideas. He strides up behind me as I'm laying out the items at the top of the stairs - alarm never went off, normally set two but one's broke - and he touches my shoulder. I'm glad he does. I was starting to feel like a hologram.

Later, we find the London Plug and tempted as we are to pull it we both agree it's probably best to get Shad Thames, Broken Wharf off the printers first.

A year before, almost to the day, and Tom's apologising for spilling beer on the table we're at in Concrete. I don't accept his apology for the waste of the beer but for the potency of what he's proposing : a commissioned work on the Docklands for the London Word Festival 2010. It's the eastward-Thames line I've been wanting to tackle (there's a Docklands poem in Zeppelins, but it's only 14 short lines) between the leisure-warp of the South Bank and, via Rainham Marshes to the reaches at Shoeburyness. Between that hop-smelling Yes and this unidentified tibula in my hand there have been a number of moments of What the Fuck? in-between:

- Forging out a routine to research the Docklands by jogging to Wapping and Rotherhithe on my lunch break with the following in my tracksuit jacket : 1 X pencil, 1 X post-it notes, 1 X A-Z map of area, 1 X researeched notes on area, 1 X MP3 player left in desk drawer so I can listen instead to fragments of people talking as I run.

- Explaining to Iain Sinclair why I'm not drinking beer before the performance at Jamboree in March begins (I'm shaking like a shitting dog and am just about clinging to my name, despite the 100 lines I've got to rememember which have got to be performed above the 12 strings of the amazing Bleeding Heart Narrative orchestra, which we haven't even rehearsed).

- Introducing my brother to the actress, Tracey Wilkinson, who plays Echo in the play, who turns out to be one of his all-time heroes for playing Di Fenner in Bad Girls.

Strangest of the strange, at least for me, is the emergence of this curiously hybridised text : a play for voices focussing on a pissup between young Scouser Blaise (nailed to perfection by Luke McCewan) and anxious Docklander Echo. Blaise and Echo were both names Sarah and me considered for the cells that became Pavel, antstamper, envelope-eater, apologist for all things Wind in the Willows. What oblique slants of light are these characters within my hologram? The chorus of THE RESTRUCTURE is an old friend, a cynical crypto-sexually warped e-savage who has taken me through a sequence of twenty poems over the two years before. His ears pricked as the play came together, he wanted to own it and does. What Jack Wake-Walker did with him in the three films he made that punctuate the conversation even stunned THE RESTRUCTURE itself, though he was pleased that someone with Jack's gift could quite rightly spend it on understaning THE RESTRUCTURE'S worldview.

And the shin-bone in my hand? It's a free-gift, for punters of the text. The mini-book of Shad Thames, Broken Wharf comes in a limited edition boxset with a mudlarked item. Further beach-digs took place beneath MI6 (all the remnants of parties and piss-ups congregate here, under the sleep-eye of the surveillance) and the place Blaise falls in love in the play, Cherry Garden Pier. The circularity of researched psychorunning and the hawking of fragments of speech to make the text, and then to come back to beach-comb the Thames to complete the project is satisfying. The play had always been about collecting and receiving the layers of London silt that are already there, and the publication the final act of transmission for what was found.

Be warned though, one of the free-gifts is unmistakeably a fossilised human tooth.

Shad Thames, Broken Wharf is available to buy now from Penned in the Margins

The play will be performed at the Bluecoat in Liverpool in 4th December 2010.

Read reviews of the play's first performance at the London Word Festival in March 2010 here, at the Londonist

Coirí Filíochta said…
Nice one : Bootle Docks, Nina's Bar Wednesday evening and a pub full of truckers watching several women remove their costumes. Strippers, controlling a highly charged booze fuelled & smoke-filled (pre-smoking ban) room in which men, hard men from all over Britain, and the Scousers of Bootle, came to do their drinking; two minutes West from the Bootle Irish club, prince Nazim Hamed backtripping into a ring, cocky, surefooted, the start of his career ; Liverpool, watching, waiting, asking, who's that fuckin wolleyback twat drinking on her own, in here, in the fuckin Bootle Irish, hey - not my fucking mot, they roared across the Dock Road at 3am, a holographic rage-page-stage, ah! fuck it, the strippers are made up, it didn't fucking happen, yeh?
9 November 2010 at 15:28

limecrime said…
Thanks for the info, it was really helpful. I'll surely visit back again later.Thanks & Regards
Lime Crime
1 March 2012 at 04:45