poems from the edge of extinction in new york


I've just got back from launching Poems from the Edge of Extinction in New York. This anthology includes 50 poems in the world's endangered languages, and the launch at Bowery Poetry included readings from Laura Tohe, Navajo Nation Poet Laureate, Belarusian poet Valzhyna Mort and Bowery Poetry founder Bob Holman. 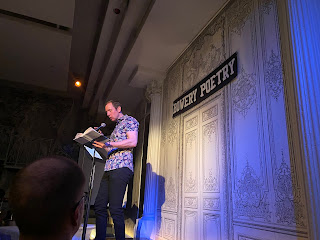 It was my first time in New York, a city which has taken on elements of the mythic in my poetic imagination. I took Walt Whitman's 'Crossing Brooklyn Ferry', Lorca's Poet in New York and Hart Crane's The Bridge, as companions. The Bridge has become a really important text for me over the past for years, and like all poems that I return to, has aspects which I just can't work out. How did Crane come to fuse Elizabethan rhythm and diction with Modernist techniques? How had he come to live in a room in an apartment in Brooklyn Heights where the bridge's builder, John A. Roebling, had previously lived? And the visions ... Whitman of course, but also an encounter with Poe on the subway. All three poets surfaced in a new poem I wrote over the three days of my short trip, called 'Manhattan : An Imagined Lyric'. This is an attempt at fusing the lyric and imaginary elements in my poetry. Here's one of the brief lyrics that falls between the imagined conversations with Crane, Lorca and Whitman:

Between Brooklyn's construction & destruction,
annihilation, resurrection,
a damselfly conceived in Queensborough Tan,
prototype hatched to imago,
Hart Crane wrote The Bridge in a room
in Brooklyn Heights
where Roebling, its builder, had lived,
watching granite speckle geometrics
in daily accretion

Crane felt a suit at his shoulder,
a ghost in a mirror, hawsing timber
into literature.


Poems from the Edge of Extinction is available to buy here.
Posted by Chris McCabe at 02:43