ambit event at the bluecoat

There are so many exciting and subversive moments in Ambit's sixty year history: Ballard's fake adverts on 'innner space', Paolozzi's 'visual literature', pastiches of mass media, fusions of high and low culture and the drive to create in the face of public 'taste'. The magazine has also included two of my favourite authors, B.S. Johnson and early work by American poet Alice Notley. And like Peter Finch's Second Aeon, this is also a magazine that published visual poetry, with the iconic cover of issue 36 inviting readers to create their own poem from the different elements: 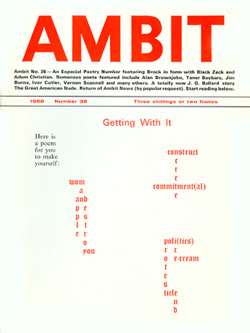 At the Bluecoat event on Wednesday, Ambit editor Briony Bax did a great job of presenting archival texts, including letters from formative editor Martin Bax, between the readings by Tony Dash, Brian Wake and Jennifer Lee-Tsai (amazingly give that all four of us are poets from Liverpool, this was the first time I'd met them). It was a particular joy to hear about how the magazine had lost its ACE funding in the sixties after they had announced a competition for literature created under the influence of drugs. Martin Bax wrote back to ACE stating that Ambit were curious about what people might do after consuming coffee or tobacco. His suggestion was that ACE must have had something else in mind, perhaps heroin or LSD?

The seminal issues of Ambit from the 1960s provided a platform for some of the most arresting and often disturbing work about the body as a site of trauma. This allowed me to read poems from The Triumph of Cancer and make connections between Ballad's apocalyptic depictions of depleted bodies and psyches, and Paolozzi's visual piece 'Relating Chairs to Bodily Mechanics'. As I said at the event, I wonder how the medical backgrounds of Ballard and Bax instinctively led them to explore the potential of invasive, physical techniques such as the collage and cut-ups? This context allowed me to read my poem 'Anarchitecture', from The Triumph of Cancer, for the first time. This is perhaps the most objective piece in the book, and draws on the visual language of New York artist Gordon Matta-Clarke, who created a way of working that involved making holes in buildings:

New York artist Gordon Matta-Clark died of pancreatic cancer in 1978, aged 35. His twin brother had committed suicide two years before. Mirrored cells duplicate. The survival rate is 5%. Matta-Clark made holes in buildings, a practice of cutting through piers to see light, digging a gallery basement that was documented, then filled in. Gaps, voids & left-over spaces. Anarchitecture.

Mirrored cells duplicate. Less than 5% survival rate. The most severe pancreatic cancer is Adenocarcinoma. It is also the most common. It starts in the digestive enzymes; is mostly diagnosed when it’s broke out from the pancreas. It spread as Matta-Clark worked on the cuttings he called ‘probes’ : I just like to get in there and alter it.

The latest issue of Ambit can be bought here.

'Anarchitecture' from The Triumph of Cancer, published by Penned in the Margins, http://www.pennedinthemargins.co.uk/index.php/2018/10/the-triumph-of-cancer/