the new concrete: visual poetry in the 21st century 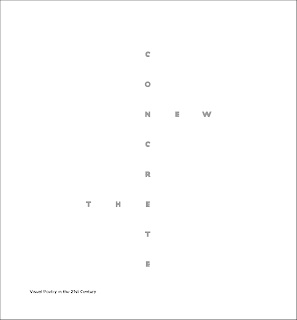 After two years of research and conversations with artists and poets‎ The New Concrete: Visual Poetry in the 21st Century has arrived back from the printers. Along with my co-editor Victoria Bean this has been a massive journey from the starting point we set off from: to capture and define the legacy and influence of concrete poetry on current visual poetry. We have also put a sharp focus on the word New in our title, exploring how image manipulation, cut and paste, digital text and the internet have all influenced work in this area. One of the most exciting strands can be seen in the work of James Hoff and Eric Zboya which uses algorithms and viruses to form work in which text is in the back- rather than foreground. The ghost of the machine of visual poetics.

This isn't a book that could be made through simply surfing the web. We've asked all 106 contributors to suggest a further poets or artists that we should consider for the book. Visual poets spiralled into more visual poets. We have looked at well over 500 possible candidates for the book. From this list we were able to put together a list of significant visual poets as nominated by the contributors to the book itself, which we'll be releasing on The New Concrete blog soon.

This wasn't a book that could be made just from looking at a computer screen. Victoria and I had to get out and see people. Tom Phillips in Peckham welcomed us up to his top story den and we told him about the book as he toked on an e-cigarette. The latest pages from the A Humument dried on the mantelpiece. ‎We drove to Nailsworth in Gloucester to see John Furnival and his wife Astrid, arriving after an incident with the side of Victoria's car and an old country wall. We eat a large rustic lunch with wine as John filled us in on the punch-ups and backbiting of the original movement. We saw the new work on his wall that would go into the book. Victoria visited Robert Montgomery in east London while I caught the Bob Cobbing exhibition in Liverpool and the Graphic Constellations exhibition in Cambridge. All of this added the background we needed as the content for the book filled with quotes on concrete poetry, images of new work and references for further reading.

The New Concrete captures the first 15 years of the Millenium in visual poetry and we hope will be viewed as a comprehensive snapshot in time of this thriving form.

http://www.whitechapelgallery.org/events/new-concrete/
Posted by Chris McCabe at 13:26