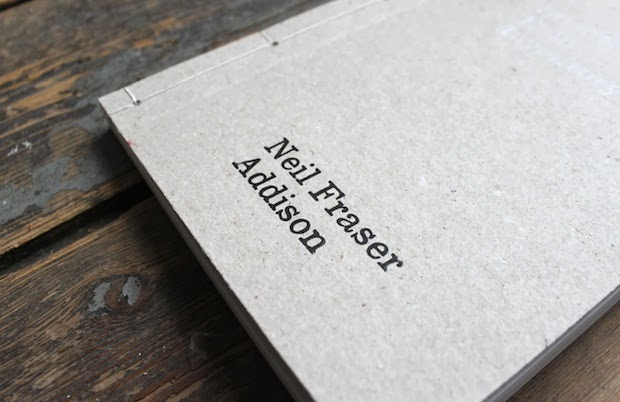 Published last year in a beautiful handbound edition of just 100, Neil Fraser Addison's brilliant collection of poems was one of my highlights of the year. Here is a guide for the uninitiated (and I'm told, amazingly, that copies are still available to buy - those interested in limited editions of poetry books should take a look before they go, or I buy them for Christmas presents):

Stealth: Addison's poems are ripped with lexical dexterity and suppleness. He's been in training for so long he can duck the heavy left-hooks of punctuation without blinking. His wit's at fighting weight, like a punch from a galeforce wind : you look for the offending blow and it's everywhere about your extremities. Your ears are ringing.

The heart is time's ox

making you a consort

meaning that I am here.

It carries life before it
and
offsets
the causes of hooves.


Exile: these poems were written in north Brazil. When he came to my house in Liverpool in the Autumn 2012 he was planning to go to China. He's just sent word from Africa: "I'm currently in Addis Ababa, embarked on another micro-publishing project, attempting to manifest a work of poetry on the hoof – this time a cycle of poems called Songs Of The City States which was first conceived of in China last year, and is now in the process of finding its resolution in Africa. To this end, my current aim is to produce a series of original hard copies - reflecting local conditions - in collaboration with artists in the Ethiopian capital." Addison makes the far-off strange world feel familiar:

Inventory: his poetry is a personal document in topographical times, the kind that future exiles will read to find their past spiritual kin. He has no need for a diary, spreadsheet or phone : he keeps to time through his poems, leaving those travelling business class to listen to their stopped watches as they pass through time barriers. Addison's poems are as tight as the schedule of the lyric poet should be, the music of his syllabics are synchronised with the speed of commutes to new places. His work documents his global wanderlust and compresses real experience into visual imagery that brings Google Maps crashing down:

Fraser's book recalls to mind the words of Guy Debord: "No exile is possible in a unified world". With or without the internet the best poetry has a way of finding us.

Steath. Exile. Inventory was released in a limited edition of 100 copies, in conjunction with OWT Creative, who lavished a great deal of thought and care on its production, as can be evidenced HERE

The book can now be bought via Knives Forks & Spoons Press who are distributing.  Book Details and PayPal link can be found towards the bottom of the main page HERE.
Posted by Chris McCabe at 04:11