The commute from London to Liverpool each Friday takes place above the rails, refuses to slow at bends : exhilarating and nauseating : terminating at Lime Street in alcohol, taxi-drivers and text messages. The week's mail waits on the kitchen sideboard, envelopes glued under post marks until the weekend. Credit statements, credit offers, credit ratings. At midnight, in the same flourish as opening the second bottle of red, I opened a handwritten A4 envelope, sent from Brazil. Antonio had turned these round in weeks : from idea, conception, proof-reading and typesetting : to publication.

Under his unit4art imprint Antonio Claudio Carvalho has produced a first series of poetry broadsheets inspired by Hansjorg Mayer's futura series from the 1960s. When he asked me to be involved it was one of those rare moments when you find yourself being written into the impossible dream history that you knew you'd missed and would only ever be a voyeur of. These are as close to remaking the original seminal publications as possible.

The original series encapsulated many of the ideals of the first wave Concrete Poetry movement of the 1950s. Firstly, the internationalism. The series included poets and artists from around the world including Bob Cobbing (England), Ian Hamilton Finlay (Scotland), Dick Higgins (USA), Diter Rot (Germany). The work included often played around with the notion of a surface level visual stimulus which could then be entered into, and read, for the language sense - or lack if it - following on from the intial seeing.

My favourite of the original series is Edwin Morgan's emergent poems, in which Morgan reverses the once accepted principle that a poem should begin with an all powerful first line. In Morgan's poems the first line is the last line - there is only one line in the whole poem - and the reader has to work through the aleatory and dissolving reassemblings of letters and words that are made from the first / last line. In 'Message Clear' there is a portent of Biblical revelation that one line - "I am the resurrection and the life" - can yield so many multiple meanings:

The poem is in constant process - is a performance continuously taking place on a wall - scrolling through its echoed chiasmus in the background of the non-readers life. Drink tea and talk - the poem is still working in real time behind you.

This broadsheet was recently shown in Concrete Cafe at the Hayward Gallery in an exhibition of concrete poetry from The Saison Poetry Library collection. This was excellently curated by Richard Parry of the Hayward: 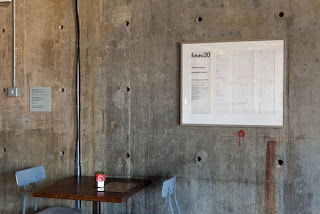 Carvalho, in this new series in homage to the original, has stayed true to this international ethos. The first six poets included here (and the plan is that there will be another six before the year end : "12 poets / 12 months") span the globe : Peter Finch (Wales), Opal Louis Nations (Born in England, now living in the USA), Pierre Joris (born in France and raised in Luxembourg), Paul Brown (England), Chris McCabe (Liverpool) and Antonio Claudio Carvalho (Brazil).

Antonio is one of the few poets / artists / publishers who could carry this out with such complete attention to the detail of the original series and the eye for both the visual and the ear for the textual. Brazilian, with links to the original Noigrandes group, he came to London in the early seventies and made what money he could through his art by walking up and down queues of people waiting to enter venues for gigs, selling self-published visual poems. As an artist his ouevre is populated with poetic inspirations from Ginsberg, to Finlay and back to Ferlinghetti. Concrete monk Dom Sylvester Houedard looms large. Antonio understands what pleases people in art - what they will gladly give up beer money for in order to take home something beautiful and lasting - as well as the fine tuning of the syllabic details of which poetry is made. Between the Beats and the Concretes he creates with massive splashes of colour as well as the tight metrical plectrum picks of poetic syntax.


With the second bottle of wine breathing I opened each of the broadsheets and placed them around the room - themselves breathing at last after the flight from Brazil - and read them as they were intended : skimmed for visual pleasure, entered into for the play of the language. Whirring indefinetly - and the first poem to catch my eye - was Peter Finch's poem about a helicopter (about the history of music since the early 20th century) from hammer lieder helicopter speak:

Opal Nations - poet, novelist and former editor of the surreal magazine of the 1970s, Strange Faeces (http://www.poetrymagazines.org.uk/magazine/index.asp?id=118) - is on fine form in this series with his alphabets to build poems, this is beetlebet:


p.o.w. 3 is the wonderfully titled learn the shadow by Pierre Joris ("to learn the shadow / shapes of the birds / of prey in a late / sky"). Paul Brown, in cold (p.o.w. 4) makes emphatic use of repeated words and word sounds to create maximum phonetic and metrical effect in very short poems:

the words
clap shut on air
stone broke
stoned &
stupefied by
the persistence of a hollow
suffering recurrent &
colourless
image:
this is all
this is it


poems for sale is an attempt by me to rewrite - and in some way reverse - the traditional 'poems for ocassions'. Rather than running with the emotionally charged need for a language that gushes to mark moments of birth, marriage and death, I had an idea of bringing each line back to dictionary definitions. Refusing the flight into sentiment and marking, instead, the transitions through life with quite literal descriptors. The title for the sequence was suggested by Antonio who was reminded of how in train stations, in Brazil, in India, those who can read and write often sell their abilities to those who can't and offer their services to write poems for them in exchange for cash. They shout to passing crowds : POEMS FOR SALE!!!

p.o.w. 6 is Antonio's sequence (the) flesh of gods. The poems pulsate with the excessive lives, loves and addictions of literary figures but are written with a lower-case dexterity that is both musical and memorable:

because they never ask

what i think of mayakovsky
rilke orlovsky


p.o.w. broadsheets are available to buy from Studio Bookshop, Brighton, and can be bought via visa through email: studiobookshop@btconnect.com. They are £5 each or £25 for all 6 broadsheets.
Posted by Chris McCabe at 14:13

Thank you for posting.
Vans for Sale